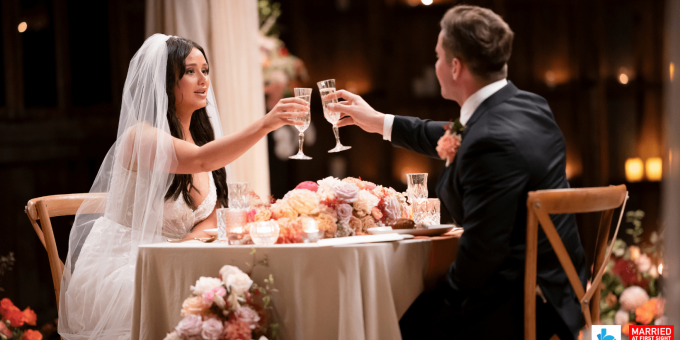 After an emotional rollercoaster of a MAFS commitment ceremony on Sunday, we were happy to have some fresh meat appear on our screens. And wowza did they bring some extra tears, tantrums and tensions to the weekly dinner party! Though, they did all look spectacular. Check out all the best dinner party looks here.

Here are our predictions for week 5 of MAFS:

We’re not sure what calls out baller more than making your future husband, and an entire film crew wait while you re-do your make up at your wedding.

Carolina has, over a very short period, indoctrinated Dion into the ‘happy wife, happy life’ cult, as he cheerfully retrieves her an almond latte while she gets her beauty rest.

Not sure if anyone else smelt something fishy going on at the dinner party, but Carolina and Daniel did seem to spin a good yarn, both stating they think the experts’ radar could be off.

We predict some funny business going on in week 5, with the potential of Carolina and Daniel getting better ‘acquainted’ (if you know what we mean).

Weirdest part of this first encounter was by far Matt encouraging Kate to sit on his lap during the wedding shoot.

We’re a bit disheartened to see Kate so blatantly not enjoying herself on their honeymoon (big clock though – did you see it?). So, Matt potentially needs to take a bit of a chill-pill on the puppy love. Besides that, he seems like a great guy. And who doesn’t pound down a packet of twisties before a big event? Hold your head high, Matt!

Week 5 will be telling for Matt and Kate, and it will take a lot of energy from Kate to make it work. Having not been in a relationship before, we think it could be all too much for Kate and she may opt to leave the experiment.

Oh wow. We think we’ve got our first major female feud on our hands.

Domenica and Jess didn’t get off on the right foot at the dinner party, with Dom feeling obliged to comment on the way Jess treats Daniel. This is disappointing to see as the females have been the ultimate girl crew in previous episodes, so we hope this doesn’t drive a wedge.

We predict that there will be more tensions between these two in week 5. Make your predictions on the Buddybet app.

Everything is looking fine and dandy for Al and Sam (except for the part where Al told everyone the ‘one-eyed snake got some action’ – gross).

They seem to be pretty smitten with each other, with Al even commenting ‘I love everything about her’. You know what this means people! He’s going to drop it on her any minute.

At his young age, having not had a girlfriend before, we think he’s a prime candidate for an early L-bomb. If we’re right, we wonder how Sam will react!

Head to the Buddybet app now and challenge your friends on all your MAFS predictions!